Home Act For The Future

Act For The Future

Act For The Future 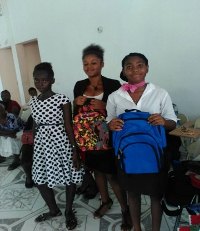 (St. Mark’s received the following message from Jacky who works with Act For The Future in Haiti teaching young people how to sew as a source of income. Please pray for the continued success of Act For The Future.)

Let me start by saying thank you for your commitment to AFTF. It’s been a real blessing having you around to champion AFTF. In a world where everyone is looking out for themselves, giving of your time, money & resources to support people you haven’t even met is remarkable. I think this is what Jesus meant in Luke 10 when he told the expert of the law “go and do likewise” (meaning go and be a neighbor to others).
Over the 7 years of the school’s existence we have gone from enrollment of 17 students a year to over 40 a year, from one sewing machine to eight, from one instructor to three, plus four helpers, five volunteers, and now well over 100 graduates. I cannot say this enough: what you do really makes a difference in Haiti. Every dollar you donate, every time you share AFTF’s story and when you pray for the school you are sharing God’s love in a practical way.
Let me give you an example. Alexis, Modelin, and Vilandieu are brothers and former students of AFTF school. Last year, their dad passed away unexpectedly. Their dad was the sole breadwinner of the family and after his passing, they were left to find ways to make ends meet. Today, instead of doing a number of things to scrape by, they are able to utilize their training at AFTF school to make a living. All three brothers work as tailors for their own clients, utilizing our facility off-hours (as all of our graduates are allowed to do). The AFTF Haitian committee also decided to bring them on as student helpers, giving them a small stipend in exchange for mentoring and help at the school. The stability that these three young men have now, especially after such a great loss, is just one example of what your efforts are doing. Thank you from the bottom of my heart for embarking on this journey with me.