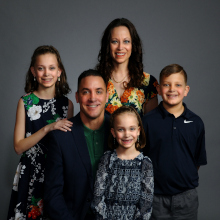 
Eric was born and raised in the Black Hills of South Dakota, and he grew up loving anything outdoors. After graduating from Sturgis High School, Eric attended the University of Northern Iowa on a wrestling scholarship, and that is where he met his lovely wife. Jill was born and raised on a farm in Hubbard, Iowa, and she attended the same college to be an elementary teacher. Eric and Jill were married in 2006, and Eric began a career in banking and Jill began teaching.

Eric grew up in the Methodist church and converted into the LCMS church before getting married, and it was then that a seed was planted for the ministry. As life went on Eric and Jill were blessed with Julia and Cal being born in Rochester, MN, and then after seven years in banking Eric and Jill decided to pack up things and move to Seminary in St. Louis. The Hauan’s had a wonderful time at Seminary and were blessed with the birth of Hazel during their third year of Vicarage in Orchard Park, NY.

The Hauan’s received their first call to Trinity Lutheran Church in Algona, Iowa in May of 2016, and Eric served there for three years as an Associate Pastor. Eric was then called to serve St. Mark’s here in Wausau, and after accepting the call he was installed as their pastor on July 14th, 2019. Eric, Jill, Julia, Cal, and Hazel are thankful to have God’s hand guiding them throughout their entire lives, and they are blessed to be a part of the St. Mark’s family.